YourDyno can control your brake. You can program RPM sweeps or steps or any RPM sequence, plus you can control brake RPM manually all through YourDyno.

This can be used in the following ways:

In order to select the analog output, move the jumpers to the position as shown below (marked AOut1 and AOut2). The other position is used for PWM and stepper motors. 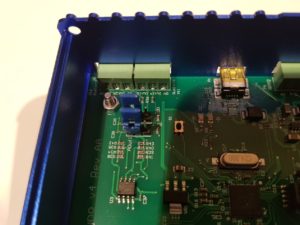 If you have an old eddy current dyno, in most cases you can use your existing power supply. They are controlled using some analog signal or PWM signal. You may connect the power supply’s control signal directly to YourDyno, or at most need to make a small interface to YourDyno. For example, old Bosch eddy current dynos use a 0-10V analog signal. To control those, you just need a simple circuit that converts between a 0-5V signal to a 0-10V signal.

In case you do not have a power supply, here are some options.

By far the simplest is to buy a finished off-the-shelf power supply. SportDevices makes a good one that is plug and play with YourDyno: http://sportdevices.com/power-supply-3.x.php. It can output 50V, 75V, 100V and 200V. 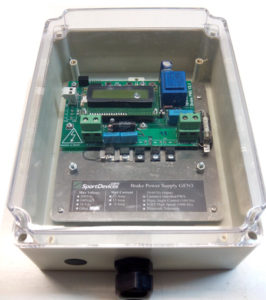 Other Power supply options for the adventurous

You can also build your own power supply using available components. For example using Semikron:

Two modules are necessary, an SCR (Silicon Controlled Rectifier) phase angle control module (for example Semikron SKPC 200) and the controlled rectifier bridge itself, for example the Semikron SKCH 28 series. The SKPC 200 controls the “firing” of the diodes in the bridge, effectively controlling the rectified voltage (DC) that is applied to the Eddy current brake. The input to the SKPC 200 is an analog signal 0-5V, that is why a filter is necessary on the PWM signal in case of YourDyno v3. YourDyno v4 can control the Semikron directly.

Make sure to select an SKCH that can take your max current and voltage. Also make sure that the bridge has a reverse diode. When the controller turns off power to the brake quickly, the current in the brake continues to flow for some time due to the stored magnetic energy. If there is no diode, the voltage increases until something breaks. The reverse diode solves the problem (make sure it can take the current too). There is also some filtering on the main supply.

Another option is to use a module from NuWaveProducts.com. The circuit is different from the circuit using Semikron modules; instead of using a controlled rectifier bridge, it chops up the AC signal, thereby reducing its energy, and this signal is then rectified using a standard fixed rectifier bridge.

The solution from NuWaveProducts can be controlled directly from YourDyno using a PWM signal. You need a couple of components in addition to the module; a 24V transformer, a current transformer (if you want current limit), plus of course the rectifier bridge itself. 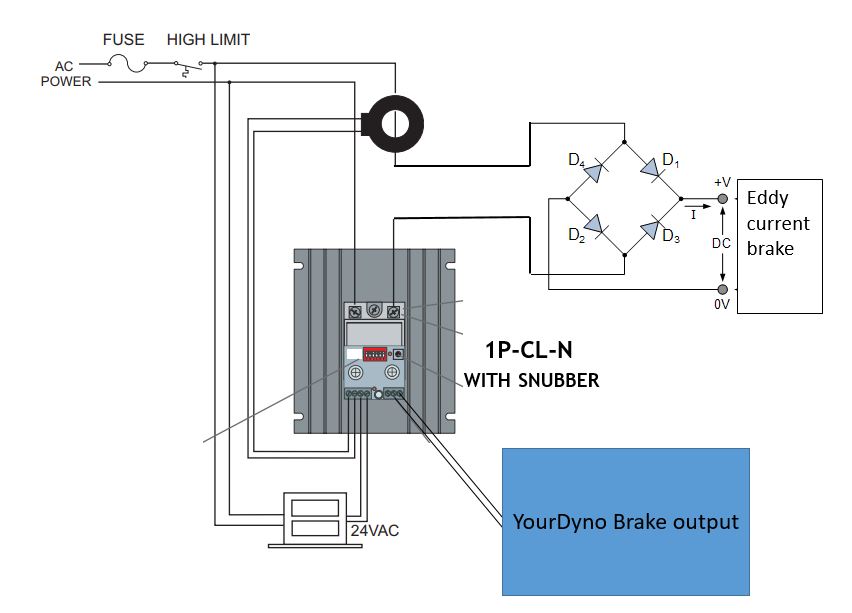 Make sure to order the module with no “soft start”. Soft start is ok for powering heaters and the like, but an eddy current brake needs as low delay as possible for the PID algorithm to be stable. Also make sure to include the Snubber. A Snubber is a filter that protects the components from high voltages when the switches turn off.

Eddy current brakes taken from buses or trucks are typically 24V originally, sometimes 12V, but can be rewired to 96V or 192V. You just wire each coil in series. This is described here (scroll down a bit in the file).

How to use an RC servo to control a valve

For dynos requiring the control of a valve, for example Water Brake dynos, you can use an RC servo or Servo motor or a stepper motor, see further down. For an RC servo, set up the PWM parameters like this:

With these parameters, YourDyno can directly control the servo.

Selecting an RC Servo
RC servos are not just small, weak servos with max 180 degrees movement. You can find very strong servos and servos with many revolutions from min to max. They can be bought from hobby stores. 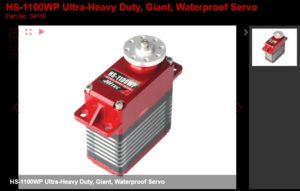 All these servos will require a separate power supply, they cannot be powered directly from YourDyno. Make sure Ground is shared with YourDyno.

Make sure to choose a servo that is fast. The faster the servo, the faster the regulation will work, which means it can deal with sudden changes in power and quickly finds new RPM targets.

Servo motors are motors that run to a certain position based on the input. So they work much like an RC servo, but they can be very powerful. They can be linear or rotational. They are controlled using either a built in or separate servo controller. Ion Motion Control has many types of motor controllers. Check out for example the Roboclaw 30A motor controller. 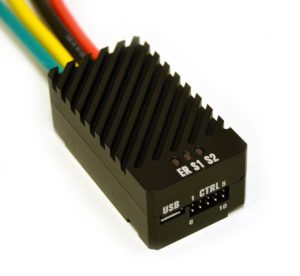 They can all use a PWM as input, so they are controlled directly by YourDyno.

Servo motors come finished with built in encoders or you can use a standard motor and add your own encoder. You will want a potentiometer type encoder (not a quadrature encoder). They are very simple in operation; if fed by 5V they give out a 0V-5V signal based on the absolute rotational position. Make sure to choose one that has at least as many turns as you need to control your valve. Using a potentomenter encoder you achieve absolute position control, which is what you need. A specific output from YourDyno will translate into an absolute position of your valve.

There are many potentiometer encoders to choose from. Some are hollow shaft and go directly onto your motor shaft. Here is a cheap option with 3600 degree (10 rotations) operating range. It can be connected to for example the Roboclaw controller to turn a DC brushed motor into a servo motor: 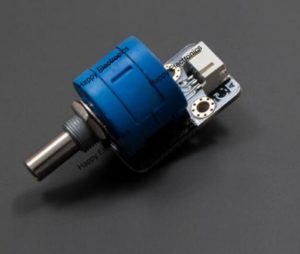 Control of the brake signal is implemented in the software using a so-called PID control loop. Using this, you need to setup 3 parameters for your brake, Kp, Ki and Kd.

Here is a schematic of the PID controller with its outputs and inputs:

e(t) is the Error signal (actual RPM – target RPM) which should be as small as possible. The 3 equations P, I and D use this error signal to create 3 components that are summed together to create the PWM signal, which controls the brake. The actual RPM is fed back again to create e(t) together with the target RPM (which by now might have changed slightly depending on the curve).

The quick start guide is to set Kp = 0.3, Ki = 0.15 and Kd = 0. If you see oscillations, reduce Kp. You will see some steady state error, which is fixed with the Ki parameter, but first get it stable with only Kp.

You don’t need to understand how the PID controller works, but you should however have a certain feel for what the three parameters, Kp, Ki and Kd do if you want to optimize your system. Read on!

P:
This is the proportional component. Many control systems work only with a Kp parameter. It is the first parameter to setup (leave the others at 0). Here is how to think about it.
Higher Kp = less error, so you want Kp as high as possible
Too high Kp = oscillations, an unstable system
Setup procedure:
Increase Kp until the system becomes unstable, then reduce back to get a healthy margin. At this point, with only Kp non-zero, your system should be stable, but will have a steady state error. For example, if your brake curve is set to hold say 5000 RPM, the brake will actually hold say 4700 RPM. How to fix that? Enter Ki:

I:
This is the integral component. This component is a steady state error remover.
Higher Ki = shorter time to reach 0 steady state error
Too high Kp = oscillations, an unstable system
Note that with any positive Ki, the steady state error will eventually become 0. The parameter only sets how fast it becomes 0.
Setup procedure: Once Kp is set, start with Ki = 1 and increase until unstable. Reduce firmly back to safety. Check how it behaves in ramps and steps in RPM.

D:
This is the derivative component. It can in certain setups help increase stability, but in many cases it makes the system less stable. It is recommend always setting it to 0.

The brake curve sets RPM that the system will follow during a run. 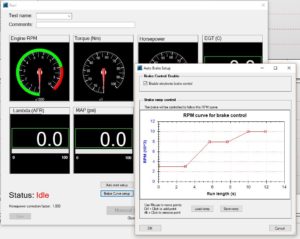 Any curve is supported, be it steady state at a single RPM, continuous ramp, or whatever. It is recommended not to change RPM in steps, as the brake force will change very abruptly, and you risk oscillations before the RPM stabilizes. Make more gradual RPM changes in the curve. 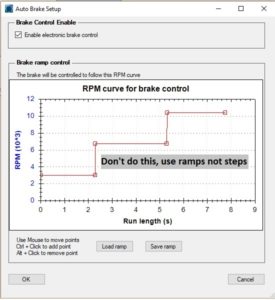 A word of caution

When YourDyno box is connected to the PC, there is a short period of time before it boots up when the brake output is undefined. If YourDyno software is not running when you plug the box in, the output continues to be undefined until the software is started. Your system must support this. In many cases this means start up the YourDyno software and connect the YourDyno box before turning power on to your brake controller.

Also, remember that errors might occur in any system, never 100% trust automation. YourDyno is meant for Do-It-Yourself’ers with sufficient experience and knowledge. Fonneland Engineering shall not be held liable for damages to equipment or personnel as a result of erroneous instructions or operation of the hardware or software.