YourDyno has several brake modes that can be used to control your brake.

Choose Manual RPM control to step through the RPM range manually (no RPM curve/sweep). This can be useful when mapping the engine, by keeping a set RPM and press the RPM+ button when you are ready for the next RPM.

The system is under PID control in this setting.

Choose “RPM curve” to make the engine follow a set RPM curve every time. Make a flat curve in the beginning to ensure RPM is stable when the sweep starts.

The run starts as soon as the RPM reaches the starting RPM of the curve. The system is under PID control in this setting throughout the whole sweep. Logging starts after the timeout given. 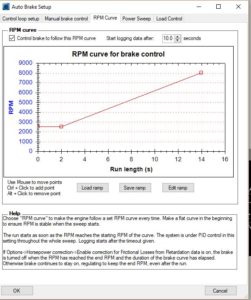 Power sweep is used to run through the RPM range and create a power graph (normal Dyno graph). The brake is under PID control during the sweep. 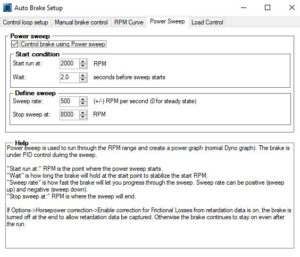 Load control is an alternative to PID control. It can be used when you want to sweep through the RPM register of the engine. It is useful for non linear systems, slow brake control, very fast torque increases and in general any time PID is difficult to make stable. See Load control to understand more about how the load control regulator works.

Use it like this:
“Start brake at RPM” is where the brake starts to turn on. This sets the start Reference RPM.
“Gain” sets how much the brake changes per 1000 RPM. For example 25% means the brake increases by 25% when RPM increases by 1000 relative to the reference RPM. There are two gains, one for the starting condition and one for the sweep. Start Gain is typically higher than Sweep Gain.
“Wait” defines how long the system waits before the sweep starts. Logging also starts after this timeout.
“Sweep rate” sets the sweep rate in for the reference RPM per second. Your engine will not sweep exactly in a straight line, this is normal. Sweep rate can be positive (=sweep up) and negative (= sweep down)
“Stop sweep at RPM” is when the sweep stops and logging stops.
“Derivative factor” should be 0 for most systems, except for water brakes. Use low numbers, like 0.05. It is applied to the start condition and to the sweep.

Start by setting the sweep rate to 0 and experiment with different gains and you will quickly get a hang of how this regulator works. 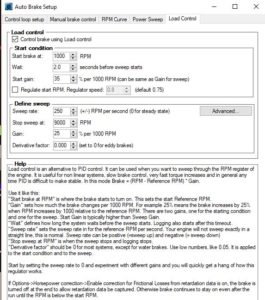